A thrusting Jamaican left-hander, Gayle earned himself a black mark on his first senior tour - to England in 2000 - where the new boys were felt to be insufficiently respectful of their elders. But a lack of respect, for opposition bowlers at least, has served Gayle well since then. Tall and imposing at the crease, he loves to carve through the covers off either foot, and has the ability to decimate the figures of even the thriftiest of opening bowlers. And in this era of Twenty20 cricket, Gayle is the batsman who has thrived like no other. Among his many strengths, perhaps the biggest one is his outstanding hand-eye coordination, which allows Gayle to regularly hit even good-length deliveries for boundaries. Technique and footwork aren't his greatest assets, but most often he compensates with other skills. No batsman has taken to the 20-over format like he has. He showed early signs of his liking for that format by smashing the first century in Twenty20 internationals - a 57-ball 117 against South Africa in the World Twenty20 in 2007 - and when Twenty20 leagues mushroomed the world over and sought international stars, Gayle was the biggest beneficiary. Over two seasons - 2011 and 2012 - of the IPL, he became easily the most feared batsman of the league, smashing more hundreds and sixes than any other batsman, by far. When he carted Pune Warriors all over the ground to score an unbeaten 175 in IPL 2013, it felt right that he should finally own the record for highest individual score, fastest century, and most sixes in a Twenty20 innings, because no batsman has dominated Twenty20 cricket like he has. Gayle's free-stroking, aggressive style is obviously best suited for limited-overs cricket, but that doesn't mean he hasn't cut it as a Test batsman. When he has turned up for West Indies, his pugnacious approach has become an attacking weapon in its own right, in what's been a lean era for West Indian cricket. His 79-ball century at Cape Town in January 2004, on the back of a South African first innings of 532, was typical of his no-holds-barred approach. However, Gayle has also shown the ability to bat long periods and the hunger to make big scores. In 2009 against Australia, Gayle batted almost seven-and-a-half hours in scoring an unbeaten 165 to save the Test in Adelaide; in the very next game, though, he smashed the fifth-fastest Test century - off 70 balls - to indicate that quick-scoring remained his preferred method. Next year he batted almost ten hours and scored 333 against Sri Lanka and Muralitharan in Galle, becoming only the fourth batsman to score two triples in Tests, thus proving again his ability to bat long periods. And then there is also his brisk non-turning offspin, with which he has turned himself into a genuine allrounder in limited-overs cricket. His tendency to stay aloof on the field sometimes suggests he isn't interested in the proceedings, but his relaxed approached was good for the team whenever he led West Indies. However, West Indies have missed his services far too often due his differences with their board. During his exile, he was a Twenty20 regular in various leagues around the world, entertaining crowds in Australia, Zimbabwe and Bangladesh. After a long spell out from international cricket he returned strongly in 2012 on the tour of England and subsequently at home against New Zealand. 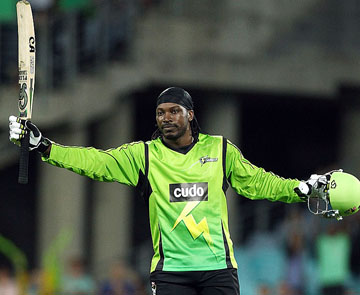